[The Surnames of Cornwall is now published. For more see here.]

So what exactly comprises a Cornish surname and how is this different from a surname in Cornwall? The old saying tells us that ‘By Tre, Pol and Pen, you shall know the Cornishmen’. Actually, you won’t. At most, you’ll only know about one in 20 Cornishmen (or women) by these criteria. Even in the later 19th century, only around 4-5% of people in Cornwall had surnames beginning with Tre, Pol or Pen. This proportion did however vary, from less than 2% in parts of the east to over 10% in parts of the west. 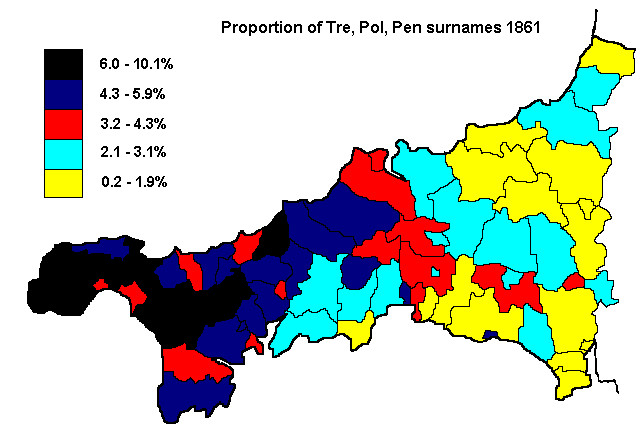 In addition, we could look for those surnames that were most frequent in Cornwall prior to the in-migration that began in the 1960s. In the 1861 census, the following were the 20 most common surnames in Cornwall. The figure in brackets shows their rank in England and Wales, as provided by a parliamentary report from the Registrar-General in 1853 that lists the top 50 surnames at that time.

As we can see, the names differed in Cornwall although the only relatively unique Cornish language name on the list is Pascoe. Most of our forebears had names that could also be found in England and/or Wales, although they were far less popular east of the Tamar. Nonetheless, as we know, those bearing these names can be as ‘Cornish’ as anyone with a Tre/Pol/Pen type name. As Robert Morton Nance put it in the late 1940s,

‘the most aristocratic of Cornish surnames may record only the loot, by a Norman, of the estate of a Saxon, who dispossessed the heir of a Cornishman, who founded it and gave it his own name with Tre- before it; while the Cornish founder’s heirs may still walk among us bearing perhaps, like so many Celts in Wales, some name such as Williams, Thomas or Richards.’

While we could quibble about Nance’s definition of an ‘aristocratic’ Cornish surname, and while archaeologists and historians have revised the picture of a simple takeover by the English, now preferring a process of cultural change, the point stands. If your parents and a grandparent or two were born in west Cornwall and you possess one of the common names of the 19th century, then there’s a very good chance that your forebears were Cornish-speakers into the 1500s and 1600s.

Moreover, there’s a third possible way of identifying ‘Cornish’ names. We might ask which names were most unique to Cornwall. In 1881 the likelihood of encountering someone of the ten names listed below was around 90 times greater in Cornwall than in England.

Some of these have their origin in Cornish placenames, for example Tremewan, Vellanoweth or Penlerick. Others like Medlyn and Daddow originated in personal names. Meanwhile, Sturtridge and Oxnam come as more of a surprise. These names are presumed to have originated in places in Devon, but had become restricted to Cornwall by the late 19th century.

If we assume that the purpose of identifying ‘Cornish’ surnames is to add to our credentials as Cornish, a people now recognised, however belatedly or reluctantly, by the UK Government as an indigenous national minority, then we must surely draw the boundaries as widely and inclusively as possible. That means including the most common and the most unique names in addition to those that more obviously have their roots in the Cornish language or Cornish placenames. This provides us with a distinct stock of surnames, some exclusively Cornish, some commonly Cornish and some frequently Cornish, but all borne by Cornish people or their descendants.

This site uses Akismet to reduce spam. Learn how your comment data is processed.