The new copper mines of the 18th century were concentrated within eight miles of Carn Brea. As these mines grew, the Camborne-Redruth district emerged as Cornwall’s dynamic ‘central mining district’. The first map below demonstrates that there was hardly any mining east of Truro at the end of the 18th century, although Breage and St Just in Penwith remained tin mining parishes.

In the peak years of mining few places in Cornwall were left entirely untouched by the industry. The next map shows a general growth in productive mines and the extension of mining to new mining districts in the St Blazey/Tywardreath district (opened in the 1810s), the Caradon and Menheniot mines (1830s), and the fabulously rich Devon Great Consols district across the Tamar (1840s).

The difficult years of the late 1860s and 1870s led to a general contraction of mining. By the 1880s copper mining was on its last legs and output was concentrated in the mines of Camborne and Illogan, where copper had given way to tin at depth. However, mining still took place in some other districts, albeit at a reduced scale. 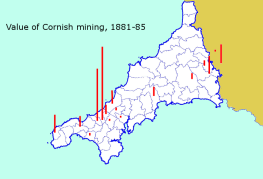 In the Edwardian period there was a short-lived boom in mining as prices rose. This led to the re-opening of some mines outside the central mining district. Nevertheless, this burst of renewed optimism was barely reflected in production. By this time, while the value of mining had actually increased in Camborne and Illogan, the only other significant centres of production left were St Just and St Agnes. 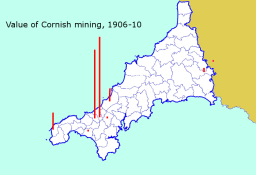 The St Agnes mines closed after World War One but Geevor (North Levant) survived at St Just to the 1980s and mining still clung on in the central mining district. Elsewhere, and even here, by the 21st century mining had become a focus for nostalgia, the Cornwall of knacked bals and ruined engine houses a metaphor for former greatness.